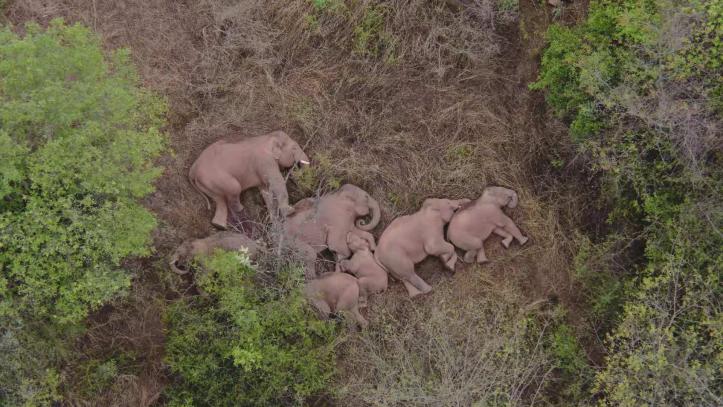 A herd of wild Asian elephants left the Xishuangbanna National Nature Reserve in Yunnan province and started marching northward in mid-March，2020. By late June the herd had reached Jinning District, Kunming City, the capital of Yunnan province, and has continued to move around the junction of Kunming and Yuxi City. The herd has six adult females, three males, three sub adults and three babies. It has been roaming for 15 months in Yunnan province, covering more than 500 kilometers (300 miles), traveling almost half-way through the province.

The wanderers are wild Asian elephants, which are listed as an endangered species by the International Union for Conservation of Nature (IUCN).

There are about 300 of the elephants in China. They are mainly distributed in Xishuangbanna, Pu'er and Lincang in Yunnan Province. The Asian elephants normally migrate within a certain range. This long-distance northward migration is the first time that humans have observed a spontaneous, long-distance migration of Asian elephants. The wandering herd has not only touched the hearts of domestic audiences, but has also attracted a great deal of international attention.

The herd was discovered in December of 2020. It started moving north in March of 2021. At that time there were 16 elephants in the herd, but a baby elephant was born while the group was migrating, bringing the number to 17. In May, two elephants left the group and returned to Pu'er, leaving 15 elephant in the migrating herd.

Along the way, the elephants foraged on farms, visited a car dealership, and wandered through villages, strolling along the streets. At one farm they ate 200 kilograms of corn, opened the tap to drink water and went into the farmland to eat the crops. On May 24, one of the elephant got drunk from eating a distiller’s grains, and fell behind, taking a day to catch up with the herd. On June 8, a video of the group snuggling and lying down in a forest, went viral on social media such as Twitter and YouTube. The video shows the animals cuddling up to each other in the forest, and sleeping in a formation with elephants facing in all directions to protect the herd and the baby in the middle.

In one scene, as the herd was crossing a river, a baby elephant was washed away by the rushing water. The elephants joined together to protect the baby and escort it back to safety on the shore.

The elephant migration has captured the imagination of much of the international media, and more and more news outlets are getting on board with their own reports about the "wild elephants heading north". A new international craze of elephant watching has taken hold in Russia, on Japan's TV Asahi's flagship news program "Station" and TBS's program "ひるおび". The elephants are now being watched by a huge number of international media outlets, including Canada’s Globe and Mail and Global News, Pakistan’s Dawn and International News, the United States’ New York Times and Washington Post, Italy’s largest news agency Ansa, the largest newspaper the Evening Post, and even the business-oriented newspaper 24 Hours Sun, the Italian National Radio and Television Company; the website of the German Süddeutsche Zeitung, Berlin Daily and other major media such as Time, Der Spiegel, Star Weekly and other media and online platforms. Even the internationally prominent BBC, CNN, Associated Press, Agence France-Presse and Reuters have maintained a high degree of attention on the wild elephant group.

Attention on the elephants has built to the point that they have been called international stars and their every move has been closely watched by a global audience.